Spine-tingling. I’m there. This is the post you’ve been waiting for for weeks – what can the spine of primates can tell us about the way they get around?

The spine is made of up a series of repeating bones (vertebrae) which are divided into regions roughly according to their shape. Humans have 7 cervical (neck) vertebrae, 12 thoracic vertebrae (which have ribs attached to them) and 5 lumbar vertebrae between the ribs and the hips.
5 vertebrae fuse together to make up the sacrum which is involved in stabilising our hips, and around 3 coccygeal (cox-ih-gee-al) vertebrae make up our coccyx, or tail-bone (fig. 1; fig. 2).

Figure 1 nicely demonstrates the curvatures that are present in an adult human spine. As shown in fig. 3, these curves are not present in our spines throughout our lives. As we get older bad posture can result in these curves becoming more or less pronounced, resulting in back pain.

Primary curves in the adult are so called because they are in the same direction as in a baby. Each primary curve is described as a kyphosis, and is named after the region of the spine it’s in. Therefore we have a thoracic kyphosis and a sacral kyphosis.
The secondary curves are so called because they develop later in life when we learn to walk, and each is termed a lordosis. We have a cervical lordosis and a lumbar lordosis. A combination of lumbar lordosis and sacral kyphosis mean that the pelvis is tilted forwards when we stand upright. This helps keep our centre of mass over our base of support (see pt. ii) along with the thoracic and cervical curvatures, and minimises the energy we would otherwise spend on muscle activity to keep us upright. The S-shape of the properly curved spine is less likely to fold over on itself than a C-shaped spine and is further supported by tough longitudinal ligaments running the length of the vertebral column (Stern, 2003).

The characteristic curvatures of the human spine are allowed by slight wedging of the bodies of the vertebrae in the appropriate direction. Thoracic vertebral bodies are taller posteriorly than anteriorly while lumbar vertebral bodies are taller anteriorly than posteriorly. On top of this, the overall size of vertebral bodies changes from top to bottom (cranial to caudal) in the vertebral column, with the cervical bodies being the smallest and lumbar bodies being the largest. This is because each successive vertebrae has to support more body weight as you travel caudally down the spine (fig. 4).

Unfortunately this is where things begin to get tricky. Just as vertebral body size increases caudally, so the distinguishing features of two regions blend into one another near the transition. Certain shape changes within regions are also shown in fig. 5A-B and D-E.

A human baby’s kyphosis (fig. 3) is similar to that seen in chimpanzees and gorillas who generally walk on all fours and therefore have to hang their body weight from their spine, much like the Sydney Harbour bridge hangs from its arch (fig. 4). (I suppose the same feature is present in babies because they crawl around on all fours).

The other main difference between humans apes is the number of vertebrae found in each region, although this also varies between apes.
Lumbar vertebrae seem to be the topic of hottest debate in the origins and evolution of bipedalism so I’ll focus on these here. As we’ve already discussed, humans have 5 lumbar vertebrae, although gorillas and chimpanzees (the African apes) have at most 4 and as few as 2 (Haeusler et al., 2002). This may sound like a nice evolutionary increase, since gorillas tend to have the fewest, chimpanzees middle, and humans most. Although, as I’ve previously discussed, the last common human-chimpanzees ancestor is unlikely to have closely resembled a chimpanzee (or a human, for that matter).

The picture gets more interesting when we consider the gibbon, which also has 5 lumbar vertebrae. Why might we have the same number of lumbar vertebrae as the gibbon, whose evolutionary lineage split from those of the other apes (humans included) over 15 million years ago?
Well, the answer appears to be related to manoeuvrability. Gibbons are highly agile and spend a lot of time brachiating around in the trees with lots of rapid changes of direction. Humans do a lot less of this, although you may have noticed that during walking, and especially running, we rotate our thorax in the opposite direction from our hips.

Comparing humans to chimpanzees simply in terms of anatomy rather than evolutionary change, there is a marked difference in the height of the pelvis and the relative number of lumbar vertebrae which are trapped by the iliac blades which rise up either side of the vertebral column (fig. 6) (Whitcome, 2010).

In both humans and gibbons, the iliac blades stop at the level of the first lumbar vertebra, while in chimpanzees the blades rise to the level of the third lumbar vertebra. The increased freedom and a greater number of lumbar vertebrae in humans is thought to allow greater rotation of the thorax to aid stabilisation during walking and running, and in gibbons to control or produce rotation of the thorax (and therefore direction change) during brachiation. This decoupling of the thoracic and pelvic regions in humans may also allow for finer muscular control of the position of the spine to help maintain an upright posture. This contrasts with the entrapped spine in chimpanzees where any spinal movement is likely to affect the whole of the body and require greater muscular activation to rescue to an upright position.

I’ll bring all of these posts together in a few weeks and talk about the fossil evidence as well – I might even add a few more in the meantime. Perhaps about the arm. See if you can guess what changes have taken place since we came down from the trees.

Answers on a postcard.

Natural Sciences Officer at Saffron Walden Museum. Working to excite people about the science and nature all around them. Passionate about animals, rocks, fossils and the environment. Musician, singer, amateur francophone. One-time busker. View all posts by James R Lumbard 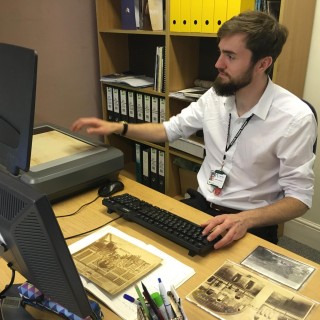 Natural Sciences Officer at Saffron Walden Museum. Working to excite people about the science and nature all around them. Passionate about animals, rocks, fossils and the environment. Musician, singer, amateur francophone. One-time busker.

What I write about:

What Missing Link’s own evolution:

What other people write about:

How to Emerge as a museum professional: a guide

Words about wildlife & wilderness, in the North East and Beyond

My fabulous adventures in Germany and beyond

Ex-travel blog turned safe space for Nana to check up on her mijo.

ArchaeoFox: Exploring the World Through the Past

Follow the research of an Archaeology Phd student over the next four years: The things he discovers, the places it brings and the people he meets along the way. (Site spelling variations; Arceofox archeofox archeryfox)

Linguistic commentary from a guy who takes things too literally

Linguistic commentary from a guy who takes things too literally

walks on the wild side
My Site
CLIMATE CALLING

To Paris and Beyond

qmqminfrance.wordpress.com/
From Palatinate to Peking

Tales from the Middle Kingdom

A blog about races and other silly challenges

More Than A Dodo

Opportunities for anyone starting out in science communication, sci-comm, STEM outreach or whatever you want to call it!

For *some* of your science communication jobs needs ;)

From a Glaciers Perspective

Glacier Change in a world of Climate Change

My Journey as an ODP student

Charlie on the Continent

Following my year in Padova and Paris

Learning to Balance Mood Disorders Through Spirituality and Self-Love.